When the Work is Personal - KIPP Nashville
Skip to content 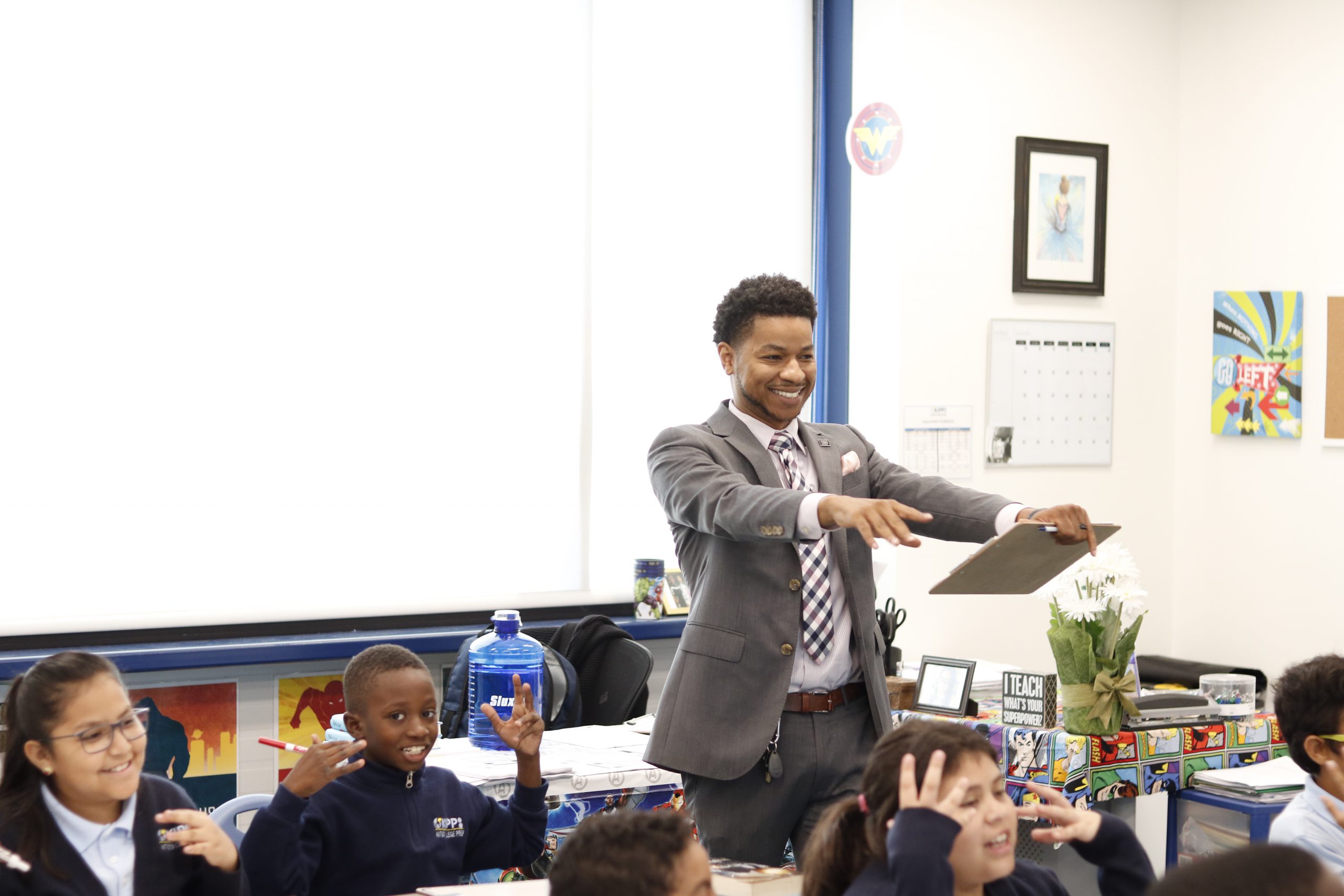 During a recent fifth grade Reading class at KIPP Antioch College prep, students are having a lively discussion about a passage in the book, Wonder.

“Why do you think his Mom said that?” asks their teacher, Mrs. Pryor.

As KIPPsters weigh in, Denon Carr walks around the room, taking notes and checking in one-on-one with students to gauge comprehension of the text.

“My day-to-day includes a variety of lesson plan observations, content co-planning meetings, running point on building and sustaining a positive student culture, and just about anything else that may come up during a typical school day. The beauty is that no two days are truly the same.”

On the first floor below, Robert Wallace is checking on kindergarten classrooms to make sure daily attendance is recorded.

“I’m basically the chief problem solver,” says Wallace, as he searches for a new uniform shirt for a student who spilled their drink during breakfast. “My time is in service toward whatever it takes to help our school run smoothly.”

Both Carr and Wallace are founding members of their teams: Carr as Assistant Principal of the middle school, and Wallace as the Director of Operations of the elementary school.

For each of them, the work and the reason to do the work, is deeply personal.

“My mom still lives in the house I grew up in, which is three miles away from school,” says Wallace. “I know the community really well and I’ve seen the community evolve. I think it’s helped me connect more deeply with our families, because we shared the same zip code.”

Carr grew up in Nashville and attended middle and high school in the Antioch community.

When reflecting on his public education experience, Carr remembers,

“My mother had to apply for a special transfer for me before high school so I could attend my school of choice and not my zoned school. The special transfer was granted. The upside, I was able to go to the school of my choice. The downside was that it was on the other side of town and we had to handle transportation. This meant taking the city bus at the crack of dawn to ride downtown, then transfer to another bus which took me as close as it could, and then I walked the rest of the way to school each morning. In the afternoons, I completed the same journey but in reverse and late into the evening.  Early on I understood the educational inequity in a very real way.”

Wallace says, “I became aware of the different paths people were taking once my friends began applying to magnet schools. I chose to stay in Antioch, but I think I knew, even at a young age, that I would have to work twice as hard as everyone else to prove myself to get into a good college. I enrolled in every AP and honors class my school offered and put my head down.”

For Carr and Wallace, the opportunity to be on a founding team of educators at KIPP Antioch College Prep was exciting, not only because they believe in KIPP’s mission – providing all students access to a free, high-quality, college-prep education – but because they see themselves in the students and families with big dreams for their child’s future.

“The Antioch community presents a unique opportunity for me to come back and positively impact the community that helped shaped me,” explains Carr. “The challenges are great, but so are the opportunities for truly transformative work. The families in Antioch are diverse in the backgrounds and beliefs but unified on what they want for their kids and their respective futures – equity and access. The rationale is similar to why I chose a career in education, and the only difference to me is that this is home.”

Wallace adds, “There are students I interact with who remind me of myself. I just think about the seeds we’re planting in our KIPPsters today and how much further along they’ll be getting this strong foundation.”

As someone focused on educational access and closing the opportunity gap, Carr says, “I enjoy working with students who share similar backgrounds to my own, because those are the students of populations who are typically ignored or wrongly targeted. Often, because of the lack of supports in place, these students aren’t fully aware of their potential and can’t comprehend the idea of the world being limitless. My mission is to help students realize that potential, then act upon it for the betterment of themselves and their community. It’s a way of paying it forward and securing their futures.”

By 2023, KIPP Antioch College Prep will be fully grown and educate close to 1,200 students in the Antioch community in kindergarten through eighth grade. Its school teams will have more than tripled in size, and its founding KIPPsters will be heading off to middle and high school – just that much closer to completing their journeys to and through college.

Wallace adds, “As someone who grew up in Antioch, imagining the future of our school and all the additional families we will welcome, makes me think about my Mom and how she would’ve felt if this had been an option for her and for me. I know she would’ve felt like there was a future here for her son, and she wouldn’t have had to worry about my school. I can’t go back in time for my Mom, but I can focus on all the other parents who won’t have to face those concerns and tough choices.” 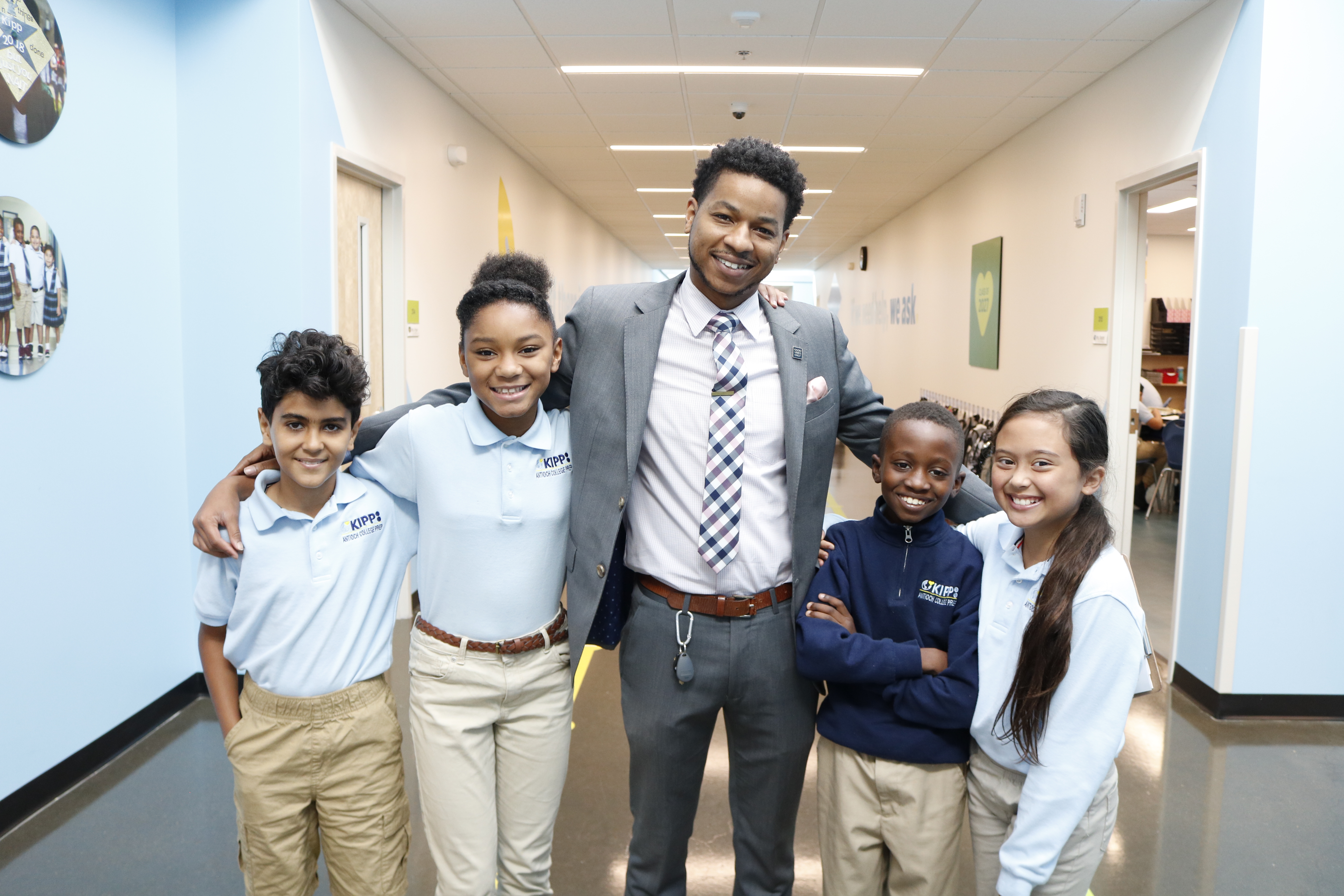