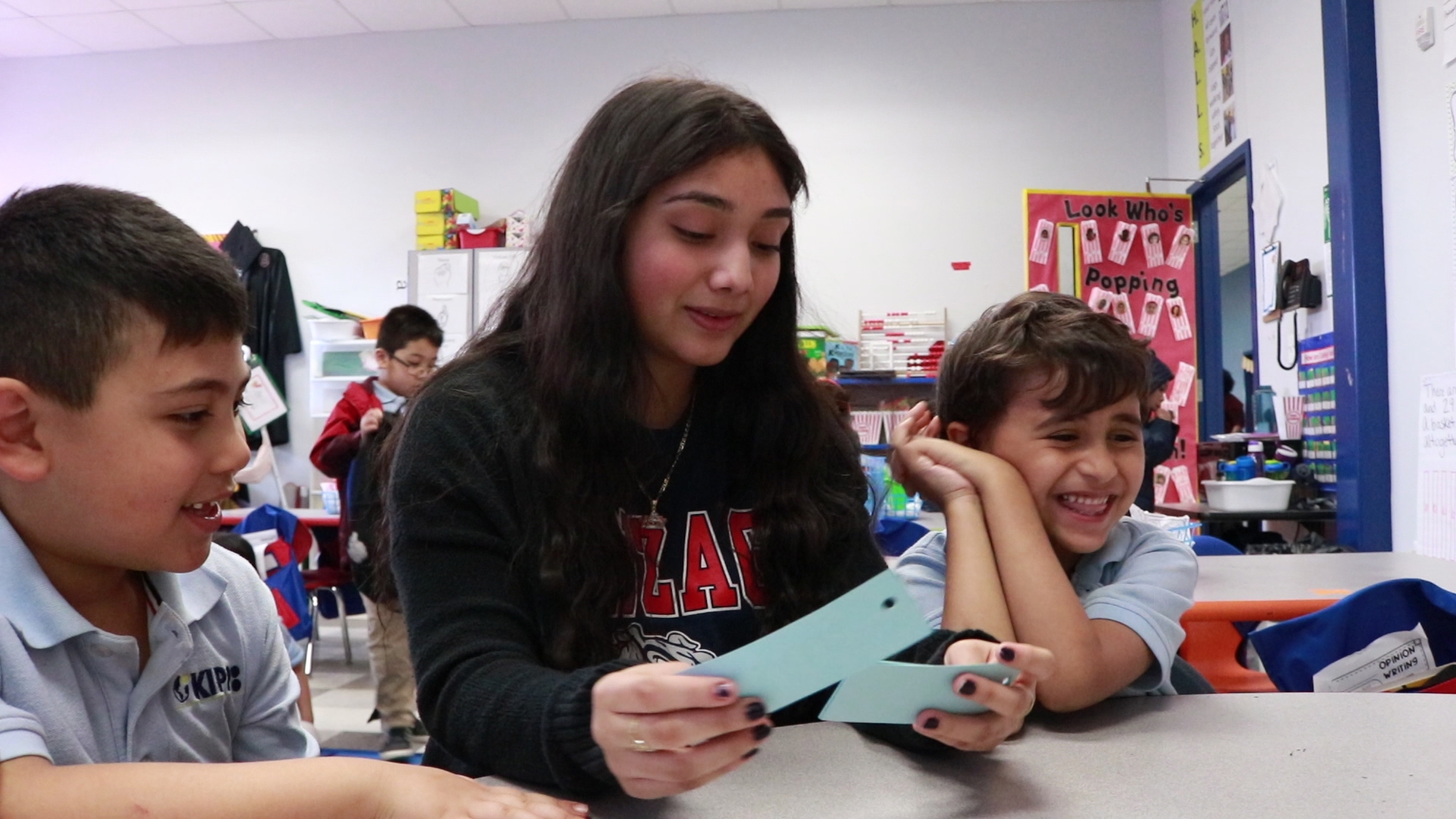 There are squeals of joy. There are cartwheels happening and lots of hula hooping. There are big, bright smiles and races around cones. These are typical characteristics of a kindergarten gym class, but there’s also something a bit different happening.

As has become a joyful routine, KIPP Antioch College Prep Elementary School students are joined by Intrepid Independence High School students. Ninth and tenth graders with kindergartners all having fun in PE together– the high schoolers maybe even more than their tiny counterparts. 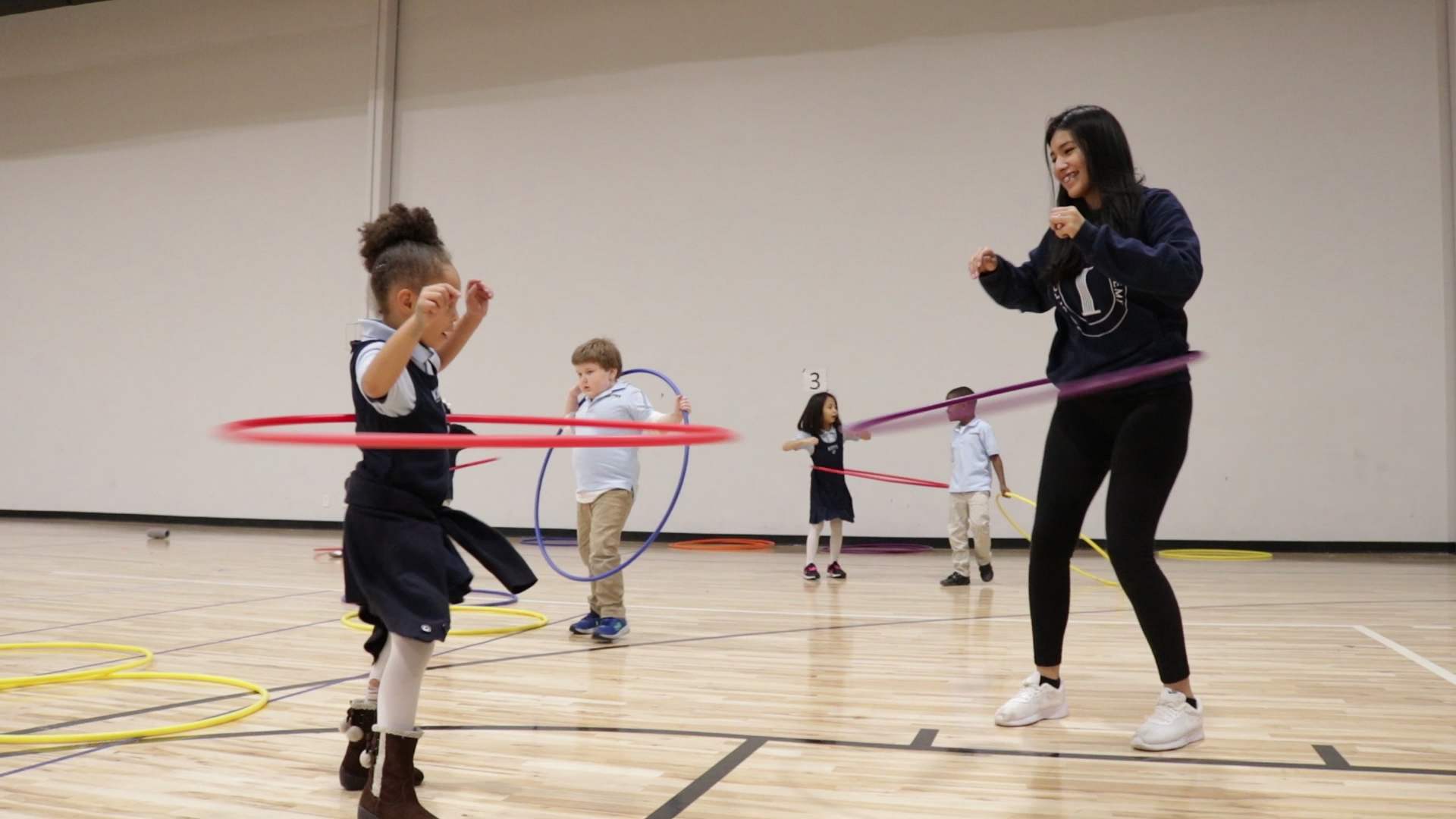 “I’ve basically given up teaching for the minute or so when the kindergartners walk by our classroom,” laughs Ms. Dudek, a ninth and tenth grade geometry teacher at Independence High School. “They’re so adorable and our students basically just stop and stare and wave at them.”

For the 2018-2019 school year, KIPP Antioch has shared space with Intrepid, occupying a hallway on one side of the building. Intrepid had space before its high school was fully grown with all grades and KIPP Antioch needed a home before a new building could be constructed.

What could’ve been two schools simply occupying space next to each other has turned into a special community sharing perhaps their most precious resources – their students.

Ms. Hawthorne, KIPP Antioch’s Assistant Principal explains, “We may be different schools, but we serve the same community, and at the end of the day, we are here because we want to make sure Antioch is a better place. This is the work that we choose to do and how we do it.”

Every Monday, Wednesday and Friday afternoon, a group of five to ten Intrepid high school students come into the kindergarten wing of their building to spend time with KIPP Antioch.

Others spend time in classrooms with kindergartners actually working on sight words, practicing math skills or playing games and just getting to know each other.

Hanone, an Intrepid tenth grader says, “I get a lot of happiness out of it. They’re so joyful. I would say they’re important to me, because they’re the future generation, and I get to watch them grow and be awesome people.”

Hanone often visits with KIPPsters in Ms. Leon’s classroom, taking special care to stop by every table and listen to each child talk. 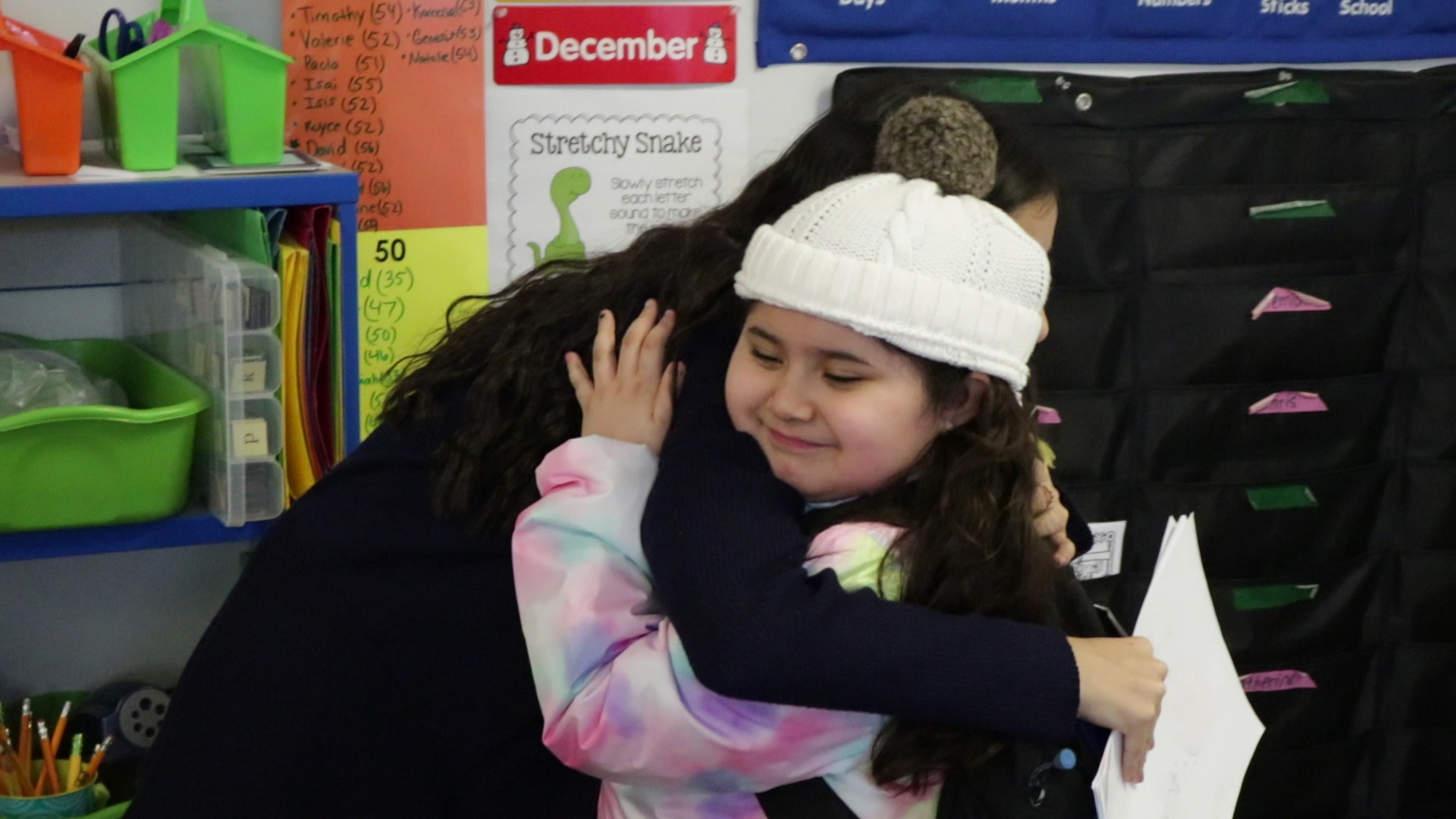 “Really I use this time to let out the kid side of me,” Hanone laughs.

Even though it is fun and clearly both kindergartners and high schoolers enjoy being together, Ms. Leon and other staff members in both schools have seen a larger impact.

“When my kids see the high schoolers watching them, they do their best. They want to impress them and show off,” says Ms.Leon.

Ms. Dudek has seen the same thing with her high schoolers.

“What I’ve noticed is some of my students who may have at the beginning of the school year acted a little less responsibly, are now showing a greater level of responsibility, because they see themselves as role models for the kindergarteners. I think it’s been a good experience on both sides.”

And for those students who may be a little shy, Ms. Leon says she’s watched conversations in their native tongue take off right away between a student and their older mentee who speaks the same language.

“I see this especially with Spanish speaking kids,” she says. “They feel comfortable speaking their language. They go back and forth with that language and don’t feel shy at all. I really love that, because I didn’t have that growing up. Seeing older kids that are in high school also gets them thinking, ‘That’s going to be me in a few years.’” 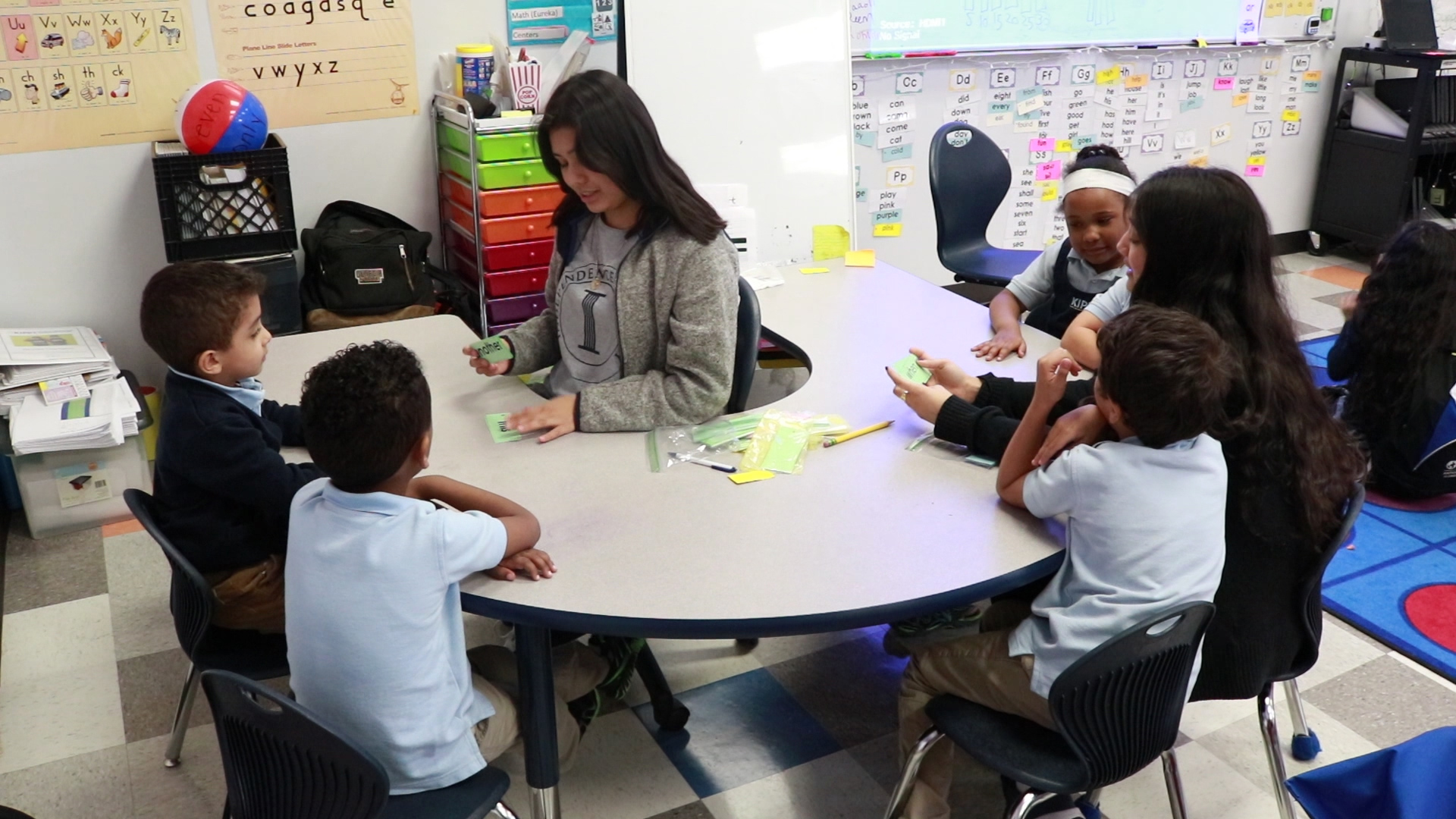 Aside from gym class and the Monday, Wednesday, Friday afternoons, the high school students say having little kids in the building has changed the dynamic in a good way.

“It relieves a lot of stress,” says Hanone. “We see them in the cafeteria having lunch as we’re walking to class and we’ll wave at our friends. It just makes you smile.”

Ms. Dudek says even teachers feel the same way, adding, “It’s been so much fun having them here. Whenever I’m having a tough time, I know I can pop down and peak into the gym and watch the little ones running around with no care in the world about who’s watching and it’s reinvigorating.”

“Nashville is not huge. It’s big, but it’s not too big for us to make better, more positive connections with each other and learn what’s working and not working,” says Ms. Hawthorne. “I promise you someone across the street or someone across town has figured it out, but we don’t know that unless we start to build relationships with them. That’s part of the reason why we wanted to build this program with Intrepid.”

With the school year ending, there’s a desire on both sides to continue the special relationship even though the KIPPsters will be moving to a new building and into their new roles as the big kids – there will be a whole new class of kindergartners looking up to them. 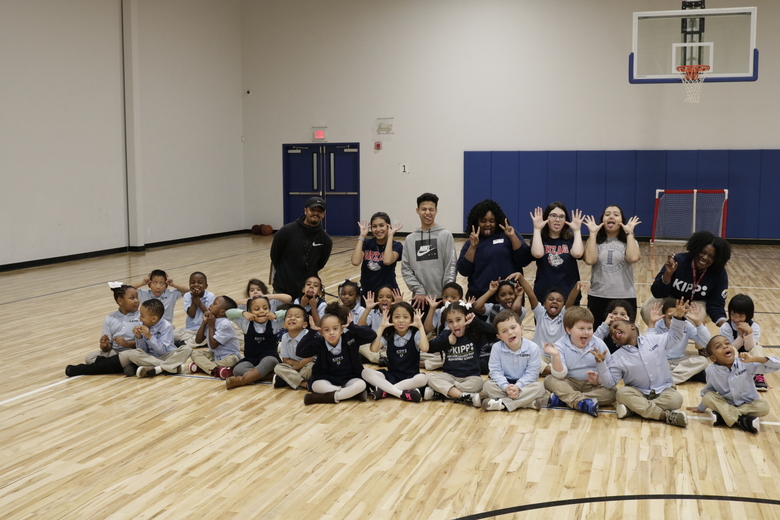