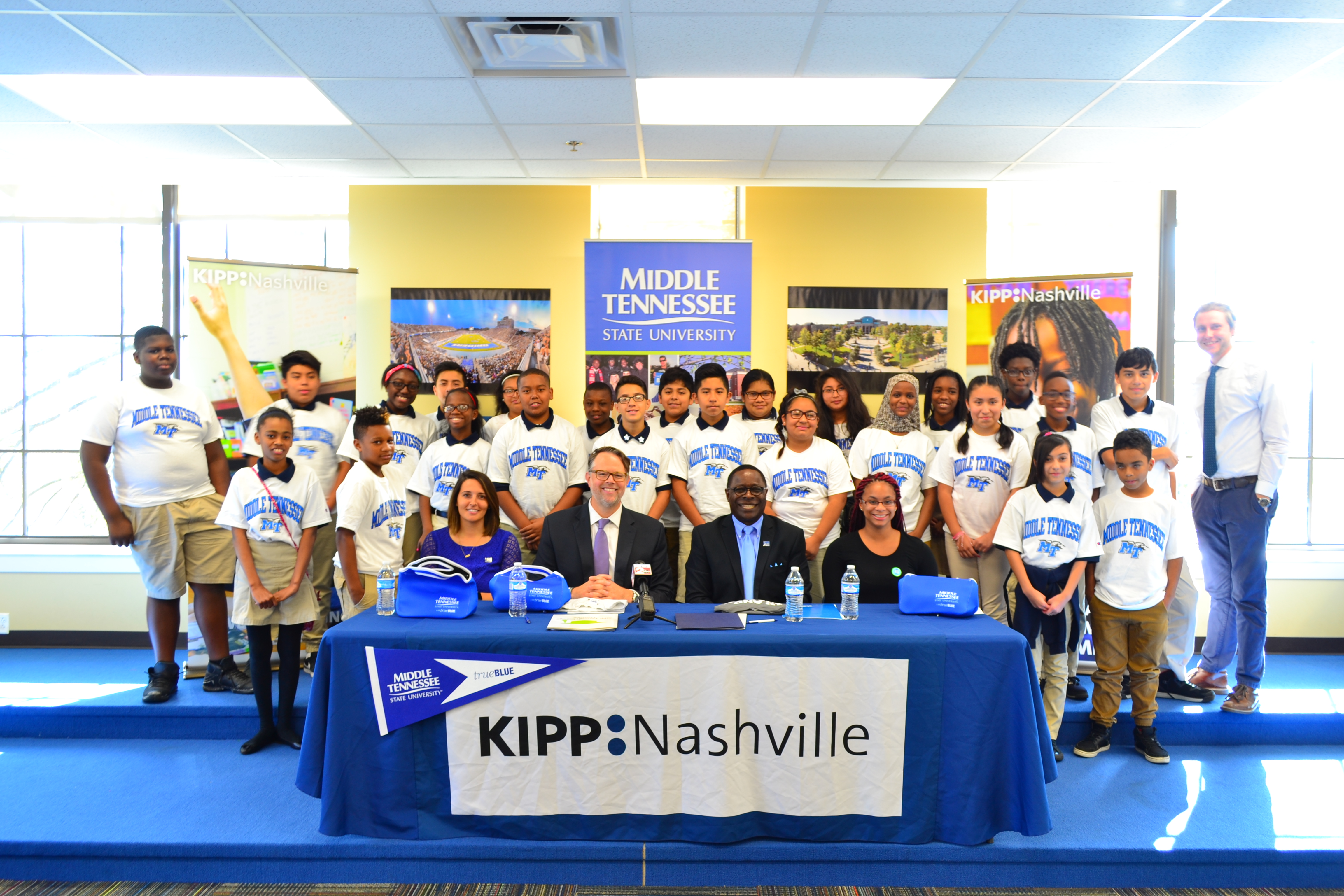 KIPP Nashville and KIPP Memphis are partnering with Middle Tennessee State University (MTSU) to increase the number of students from underrepresented communities that earn a college degree.

In partnering with KIPP, Middle Tennessee State University hopes to recruit and enroll 10 qualified KIPP alumni each year. Through the partnership, MTSU will provide KIPP students with assistance navigating financial aid, work to build a peer support network, and offer opportunities for early exposure to the university.

“We are thrilled to be entering into this partnership with MTSU,” Emily Blatter, Director of KIPP Through College at KIPP Nashville, said. “The reality is that less than 10% of students from low-income communities earn college degrees. The KTC program is designed to support our students as they make the journey to and through college, but we can’t do it alone. That’s why partnerships, like the one we’re celebrating with MTSU, are so important.”

“We are proud to become the only public university in the state to partner with this nationally recognized network of college-preparatory schools,” MTSU President Sidney A. McPhee said. “We see this as an extension of our commitment to student success, as well as the many programs we have in place to help support traditionally underserved populations reach their educational goals. With more than 90 KIPP Nashville applicants for our Fall 2017 class, we are the number one school choice for students in the region, so I’m pleased to learn KIPP counselors are encouraging students to seek out schools like MTSU that have support service similar to those offered by the preparatory school.”

With their Finish Line Scholarship initiative—a university-wide commitment to helping students graduate in four years—and Scholars Academy, MTSU already has a proven track record of providing support for its students and is a natural fit for this ongoing partnership.

“MTSU has done an outstanding job supporting KIPP Nashville alumni over the years, and we are excited for more KIPP students to join their community and become Blue Raiders,” Randy Dowell, KIPP Nashville

Executive Director, said. “We have a shared vision of seeing more students excel in college and beyond, and will work with MTSU to ensure that KIPP students have the support that they need to succeed.”

“I am excited to hear about the partnership, because not only are we spreading the team and family motto, but we are also creating bigger and better opportunities for future scholars,” KIPP Academy Nashville Alumna and MTSU freshman, Deyauna Cook, said.

KIPP is a national network of 200 schools in 20 states and Washington, D.C. educating 80,000 students in Pre-K through 12th grade. KIPP has college partnerships with more than 80 colleges and universities and 2,400 KIPP students are attending a KIPP college partner school this year. MTSU and Vanderbilt

University are the two institutions in Tennessee currently involved in the KIPP College Partnership program. You can view a complete list of KIPP’s college partners here.

KIPP students nationwide have a track record of completing college at higher rates than national averages. According to 2010 U.S. Census data, 31 percent of Americans aged 25-29 have earned a college degree. For students in the bottom economic quartile, only 10 percent complete college by their mid-20s. As of fall 2015, 44 percent of KIPP students have earned a four-year college degree after finishing eighth grade at a KIPP middle school 10 or more years ago. Nationally, KIPP students complete college at a rate that is above the national average for all students and more than four times the rate than that of students from similar economic backgrounds.