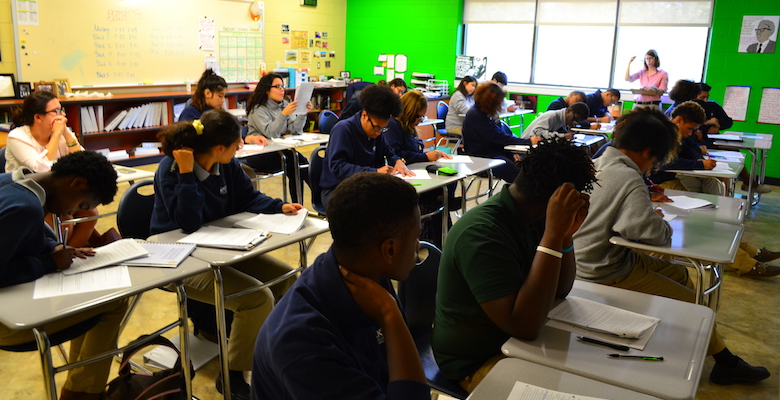 “This is the first year I’ve ever paid attention to an election.”

In Kaleigh McRoberts’ composition class, heated discussions about the 2016 election among the juniors don’t exactly involve what you might expect to hear.

There’s talk of anaphora, hyperbole and antithesis. Students cross-reference marked up copies of each candidates’ official party nomination speech from the summer. There are arguments made for and against Hillary Clinton and Donald Trump’s positions. And those arguments aren’t just based off what each student is feeling, or what they might’ve heard on the news that morning. 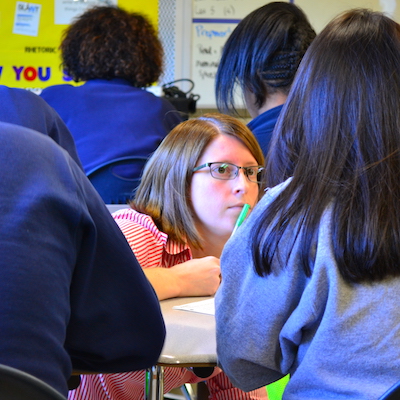 This particular discussion is very much rooted in research and careful consideration.

Each of the high school’s three composition classes were prompted to answer this question based around our country’s motto, E Plurubus Unum, which means out of many, we are one: Compare Clinton and Trump’s vision for a unified America. Which candidate uses rhetorical strategies most effectively to convey this vision?

Writing an essay on this topic was part of the high school’s special unit, Election 2016, along with a cross-grade seminar that mixed students from ninth through eleventh grade for the purpose of encouraging discussions, a quiz to see which candidate students’ most aligned with, culminating in a school-wide mock election.

Critically analyzing each candidates’ stance on the issues is something many of the students hadn’t done before.

“I liked the unit, because it made me more aware of each candidate and what their initiatives were,” Joe Villalobos, a junior in McRoberts’ class, said.

Joe’s classmate, Janelle Johnson, added, “This is the first year I’ve ever paid attention to an election. Initially, I started paying attention to the debates and the presidential election in a childish mindset, because they were so different from each other. But once we began really looking into it, I started paying attention more in a mature mindset, thinking of what would be the effect or result if this person got the position as president rather than this person? And what would it do to our society? I started thinking about it like that rather than focusing on what jokes they cracked at the debate. My whole mindset changed.” 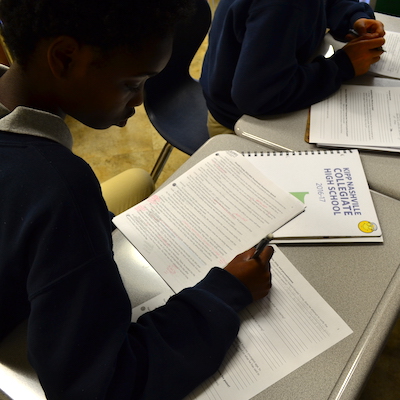 This is the kind of thinking McRoberts says she hoped the unit would prompt, “What we wanted our students to do was to be able to understand how perceptions are shaped. I think one of the biggest questions so many people have asked is ‘How did we get here?’ I want our students to be able to say I completely understand how we got from point A to point B based on what’s happening in the language of our country right now. And then to be able to say ‘What can I contribute to this conversation to steer it down the right path?’ And I feel like this unit helped us move our kids in the right direction.”

Neither Joe or Janelle are old enough to vote yet, but Joe says when he turns 18 in a year, he plans on approaching his right to vote with a whole new set of eyes and appreciation.

“During the next election, I’ll definitely be researching the candidates, because it’s not just for me, it’s for the younger people and the next generation that this is going to effect,” Joe said.