Breathe In. Breathe Out. Strike a Pose. - KIPP Nashville
Skip to content 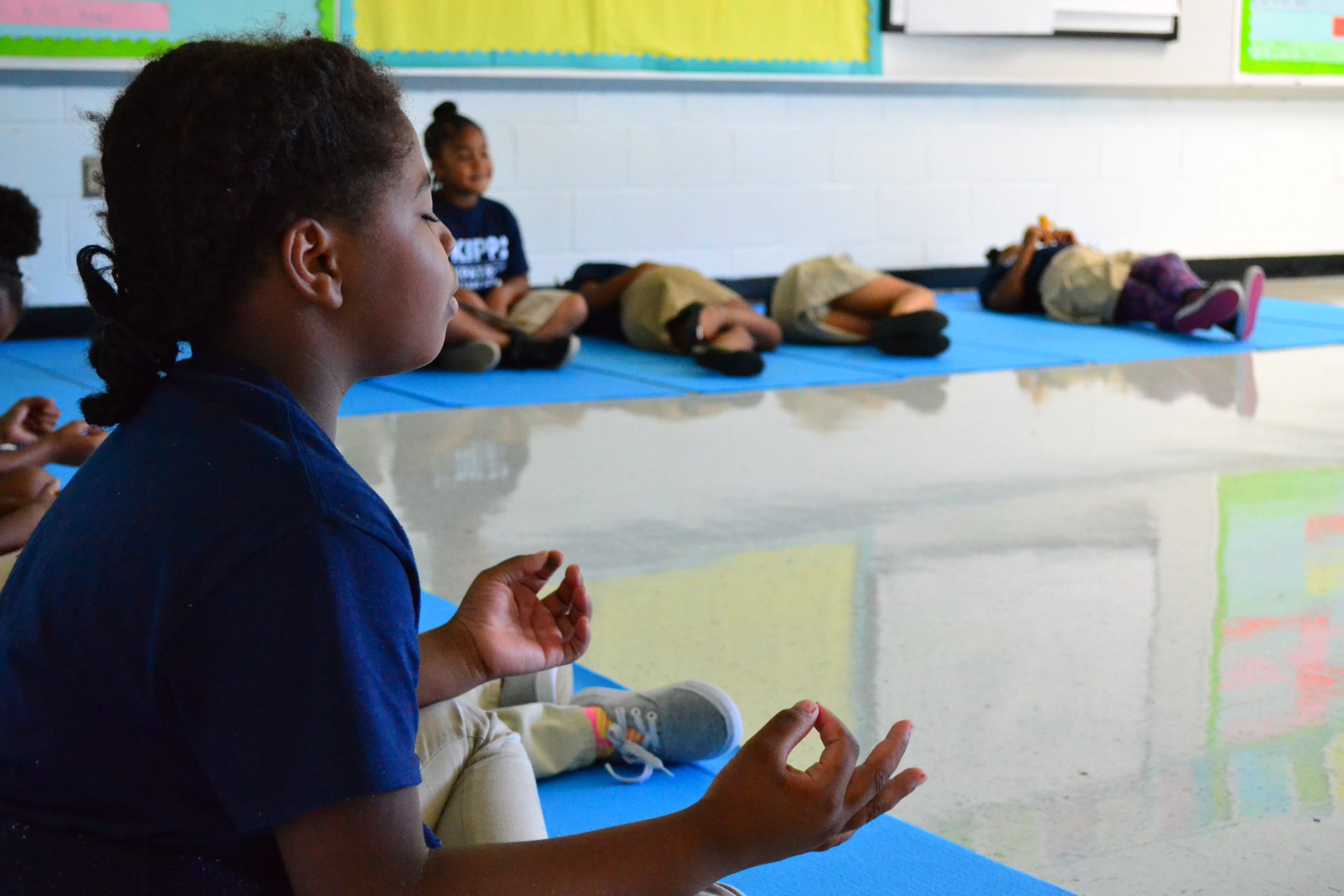 “I feel calm and I feel relaxed.”

It’s a bright and sunny day, and Room 207 at KIPP Kirkpatrick Elementary School is bathed in soft, afternoon light. You won’t find any desks inside this classroom.

Second graders walking in are greeted with peaceful music and begin to lie down on their mats. It’s time for yoga in Dayna Perry’s class.

“All right, start your breathing exercises. Big breath in and out,” she instructs, as one of her student helpers hands everyone a ‘breathing buddy’, a small stuffed animal that hangs out on each child’s stomach. 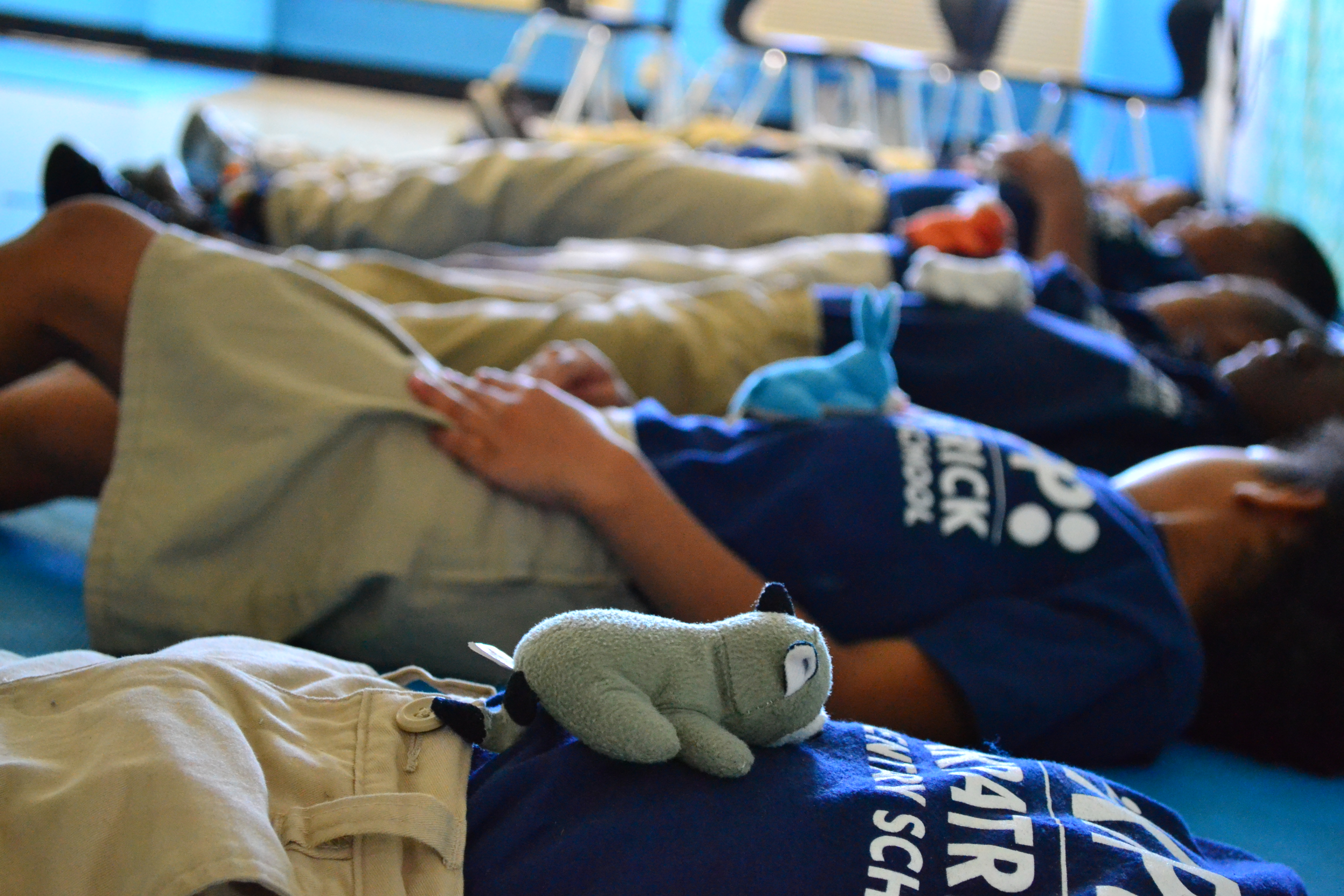 “The animals on their belly make breathing fun,” Perry, who is a certified yoga instructor, said. “They put it on their stomach and watch the buddy go up and down. Each classrooms have breathing buddies, too, in case students needed to use them.”

Yoga lasts for one hour and is part of each KIPP Kirkpatrick Elementary School students’ weekly routine—that’s 300+ students. Depending on the grade level, some students have yoga twice a week, others three times.

And reactions from Ms. Perry’s yoga protégées have been positive.

“I’m happy when I’m in yoga,” said Marin Lujendo, who’s in second grade. “I like how Ms. Perry puts on music and how we have stuffed animals.” 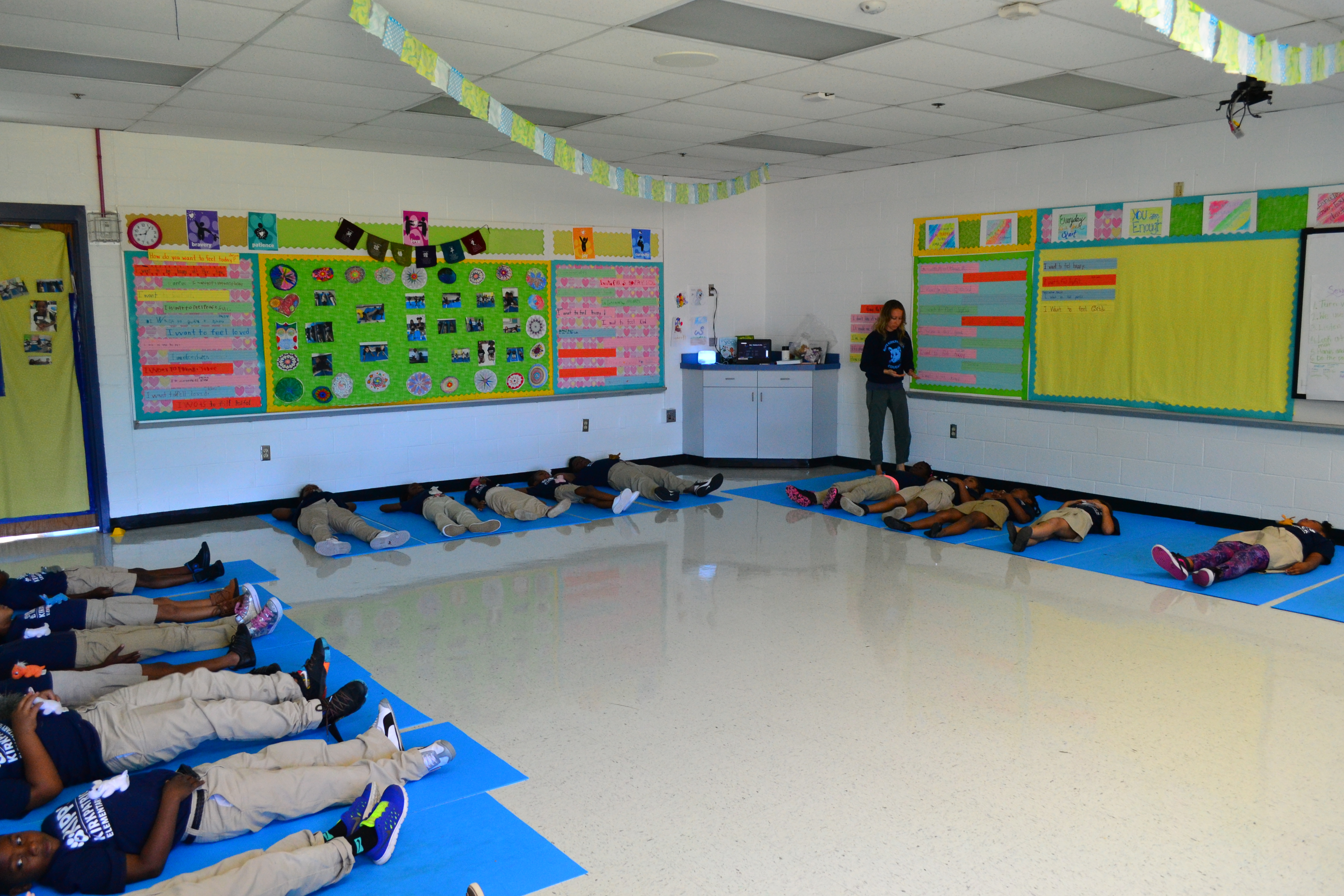 Aside from providing a calm, quiet and safe space for students, teaching yoga in school has other added benefits when it comes to behavior and coping with stress.

Tori Charette, KIPP Kirkpatrick’s Mental Health Counselor, explains how Kirkpatrick tries to understand the current needs of each of its students by talking with families, as well as analyzing results from an ACE survey, otherwise known as the Adverse Childhood Experiences survey.

“In this survey, there are 10 yes or no questions that are about traumas that may have been experienced in a family,” says Charette. “Research suggests that if a person or child has three or more ACE points on the survey, they are more likely to suffer from serious illness, such as diabetes or heart disease. They are also more likely to develop depression, addiction, or self-injurious behavior. They are also less likely to graduate from high school.”

At Kirkpatrick, 50-60% of the students have experienced at least three traumatic events, and Charette estimates the actual number is even higher as many families do not disclose.

Charette also adds that people who have experienced trauma tend to feel out of control of their body, because of the frequent release of cortisol in the body—cortisol is released in the brain to trigger your fight or flight response. 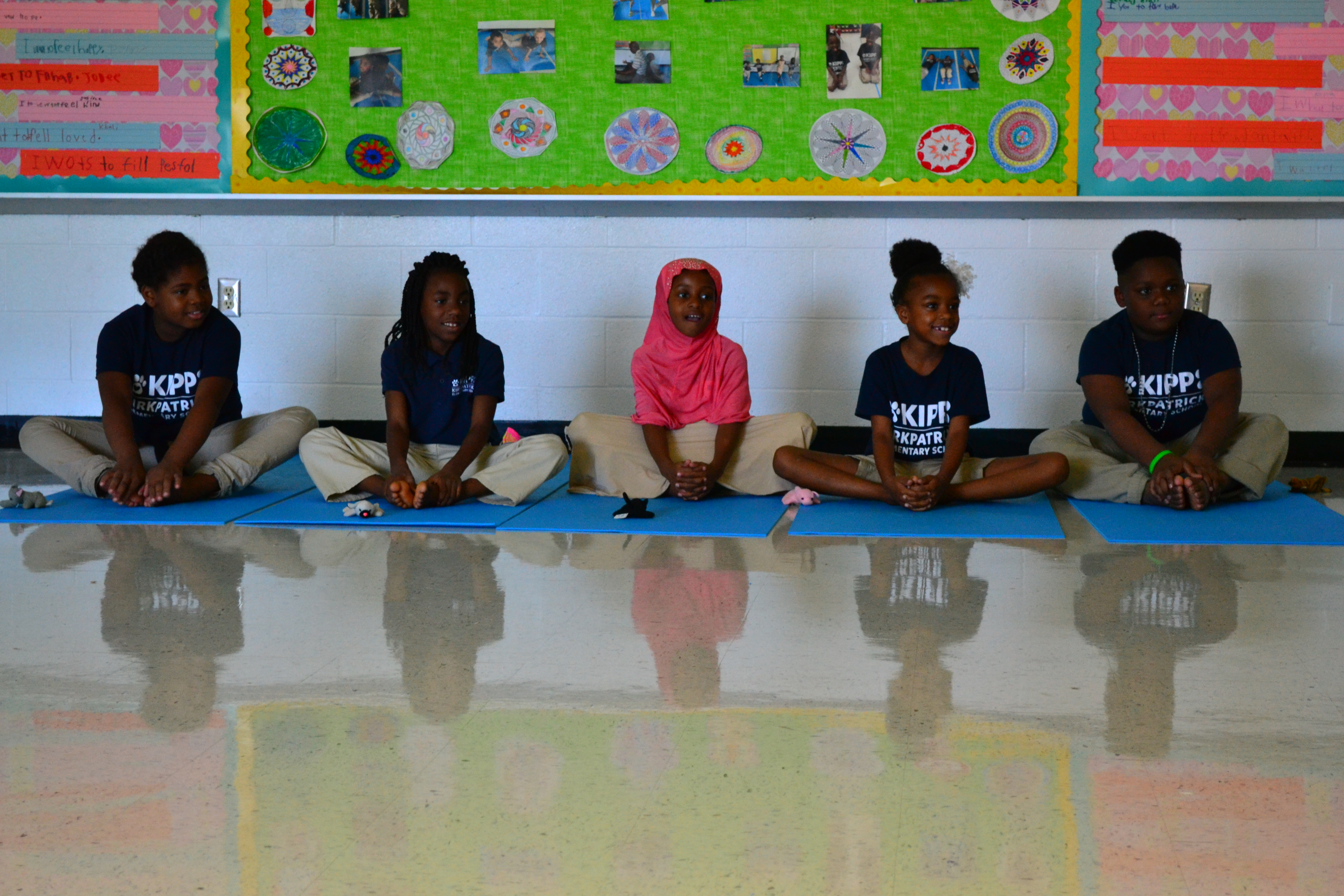 “Yoga at Kirkpatrick means that kids are practicing how to take control of their bodies, thoughts, and reactions,” explained Charette. “Students are learning deep breathing as a coping skill they can use in their classrooms, homes and neighborhood. Ms. Perry leads a guided meditation at the beginning of each class to help students learn to self-soothe and to focus. These skills students are learning in her class are transferred to classrooms, where yoga breathing is encouraged.”

Whether this second grade class realizes the importance of the skills they’re practicing, it is seeping into the rest of their lives.

“I’ve seen kids use their breathing sometimes throughout the day, doing yoga poses in line,” said Perry. “I’ve also had tons of families tell me their kids show them yoga poses at home, so I’m really pleased with how much they’re catching on to it. Plus, as a whole school, we’ve been working on breathing and quiet time and calming down. That has been our language all year, so I think it fits in well with it. And now that every student has had yoga, it can be a good cue to say ‘Remember what you’re doing in yoga’.”

“I feel calm and I feel relaxed.” 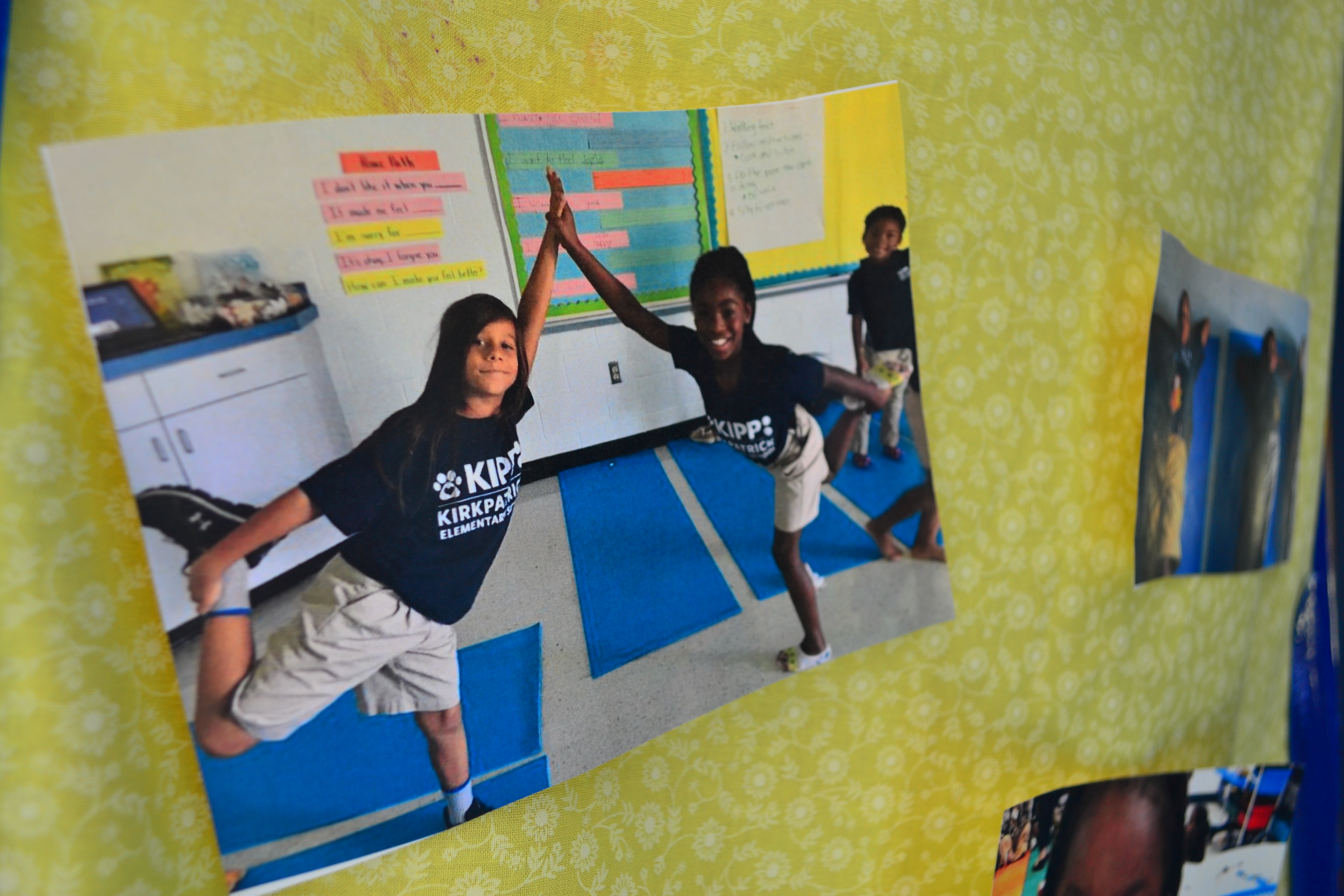